Christian Eduardo Esquino Nuñez, the lead witness in the case against Cynthia Vanier, is now out of his Mexican jail cell, and he is apparently threatening to expose secret voice and video recordings of Gregory Gillispie, the American who brokered the aircraft lease for Ms. Vanier to fly to Libya.

Ms. Vanier, as anyone familiar with this blog knows, is the Canadian facing charges as the ringleader in a plot to smuggle Saadi Gaddafi, fallen Libyan dictator Muammar Gaddafi’s third son, from North Africa to Mexico,

Mr. Esquino Nuñez is a curious character. When La politica first became involved with the case regarding Cynthia Vanier, we visited Ms. Vanier’s parents on the shores of Lake Chapala, Mexico. One piece of information that was given to us at that time, and that seemed very odd, concerned the role of a married couple: “Bertha” and “Ed”.

Ms. Vanier’s parents did not know who these two individuals were. However, we were informed that Ed was a criminal, and that Bertha – the best friend of Gabby de Cueto (aka Gabriela Davila Huerta), who now shares a jail cell with Ms. Vanier in Chetumal, Mexico – might have planted the fake Mexican voting card on Ms. Vanier.

This card is a key piece of evidence in the case against Ms. Vanier, as it was on her person when she was arrested on November 10, 2011, and connects her to a false Mexican identity for one Cinthia Anne Macdonald Grau, who opened two bank accounts that were allegedly to be used to funnel cash into Mexico to support Mr. Gaddafi in his new life.

We now know that Bertha is Bertha Cruz de la Cruz, and Ed is her husband, Christian Eduardo Esquino Nuñez. Both these individuals are central to the prosecution’s case against Ms. Vanier and the three other defendants.

Those other defendants are: Ms. De Cueto, Mr. Gillispie’s business partner and Bertha’s best friend, who helped broker aircraft for Ms. Vanier; Pierre Flensborg, a jet-setting Dane who was a business associate of Ms. De Cueto’s; and José Luis Kennedy Prieto, known as a document forger, but who was also at one time a police commander of homicide squads in Mexico City and Hidalgo.

Bertha Cruz de la Cruz is relevant also because she allegedly received an email to her Gmail account from Gabby de Cueto’s Yahoo account that included an attached photocopy of Saadi Gaddafi’s passport, as well as references to his family members.

According to a statement Ms. Cruz de la Cruz gave to Mexican prosecutors, she queried Gabby de Cueto as to why she received the email, and Gabby then allegedly asked Bertha if she knew of anyone who could put together false documentation for Gaddafi, his wife, and their young son and daughter.

Ms. Cruz de la Cruz, law abiding citizen that she is, apparently told Mexican law enforcement that she further challenged Ms. De Cueto as to why she would be asking for that, as it could land them all in a boatload of trouble.

However, the most solid testimony against Cynthia Vanier may come from Mr. Esquino himself.

Mr. Esquino has told the Mexican government that during a 45 minute car ride on September 20 from Toluca, where Mr. Esquino kept the aircraft he leased, to Mexico City, Ms. De Cueto and her business partner Gregory Gillispie spoke of a plot to bring Saadi Gaddafi to Mexico.

This evidence was given by Mr. Esquino on January 9, 2012 – two months after Ms. Vanier and the others had been arrested, and almost four months after the alleged conversation.

In Mexico, individuals can be detained for 80 days without charge. Mr. Esquino’s recent release suggests that Mexican authorities are holding off on criminal charges, perhaps because they consider him to be more valuable on the outside, from where he can assist them in building the case against Ms. Vanier and her co-accused.

A  plea, a short sentence, and deportation to Mexico

Mr. Esquino is no small time crook. On January 24, 2005 the Southern District Court of California convicted him of conspiracy to commit fraud involving an aircraft. Mr. Esquino had pled guilty, and was sentenced to two years in prison.

When he got out in 2007 he was deported to Mexico, whereupon he was arrested again, only to walk and assume the name “Ed Nuñez”. Nuñez is Mr. Esquino’s matronymic – his mother’s maiden name. Though in Mexico the matronymic is formally carried at the end of one’s name, it is rarely used exclusively. In effect, Mr. Christian Esquino had assumed another identity as Ed Nuñez without technically breaking the law.

Sources familiar with Mr. Esquino’s legal troubles in the United States have told La politica that the fraud charge was the low-hanging fruit – it was an easy conviction, which could then assure deportation upon his release.

But there were real victims. Court documents show Mr. Esquino bilked four parties out of a total of $435,000.00.

Mr. Esquino had an aircraft financing company, Wing Financial, which operated out of the same address as his better-known firm, Starwood Management, in Las Vegas, Nevada. Wing Financial, which employed both Mr. Esquino and his sister-in-law, Bertha’s sister Norma Gonzalez (aka Norma Cruz de la Cruz), was embroiled in financial and legal troubles before filing for Chapter 11 bankruptcy protection in the State of Nevada on February 2, 2010.

Interestingly, Mr. Esquino’s sister-in-law was willing to take the fall: Norma Gonzales is named as a “Managing Member” on the petition, but Mr. Esquino is nowhere to be seen.

The trail of tears in this filing is long and soggy: ten plaintiffs, both businesses and individuals, claimed a total of $5,520,000.00 against Wing Financial. The real number is likely higher: two of the individuals placed unknown amounts, claiming assets that were “unliquidated disputed”.

As well, on February 11, 2010, a man named Hugo Alvarez cited Norma Gonzalez, Wing Financial, and Christian Esquino as defendants in a suit regarding a property foreclosure in San Diego, California, where Mr. Esquino lived before his incarceration.

After Mr. Esquino’s release from prison he was not permitted into the United States. However, he appears to have continued to conduct business in the United States, and to be using his sister-in-law to front for him via Wing Financial, just as he used his wife Bertha to run the Mexican side of his aircraft leasing business while he was in prison north of the border.

Interestingly, on March 17, 2010, which was about a month after bankruptcy was declared, a temporary protective order was placed by Barnardo Cárdenas Cota on 13 aircraft owned by Wing Financial. Cárdenas Cota has been linked to the “loss” of ten million pesos (approximately $760,000) related to the construction of a sports complex in Los Mochis, a coastal city in nothern Sinaloa, Mexico. 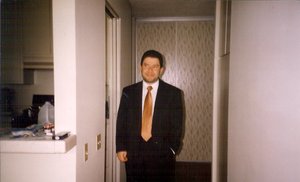 Esquino Nuñez enters the picture - and moves to the foreground

And as a curious aside, included in the 13 planes was a jet owned by Jasper Knabb, ex- Chief Executive Officer of Pegasus Wireless Corp. Wing Financial acted as the shell company that financed Mr. Knabb’s Gulfstream II. In July of last year Mr. Knabb pleaded guilty to securities fraud related to a $25 million scheme to sell shares for bad debt, with the proceeds then shunted over to Mr. Knabb, his family, and friends.
Mr. Esquino’s legal troubles are far from over, despite his release from jail in Mexico. He recently had two planes seized: one in Arizona, and the other in Monterrey, Mexico.

On April 18 his still-active US-based company, Starwood Management, filed suit against the United States Department of Justice Drug Enforcement Administration for forfeiture and penalties, presumably in the hopes of getting his plane back.

And now he is upping the ante by promising more damning evidence against Mr. Gillispie.

What is he doing?

In La politica’s opinion, he is promising the Mexican authorities he can deliver them a conviction, in the hopes of buying his freedom.

This is a huge case in Mexico. President Cardenas himself has put the credibility of his administration on the line, having claimed that the arrest of Ms. Vanier and others is proof that Mexico, the United States, and Canada have a successful security partnership.

We don’t yet know the whole truth of how this alleged plot saw the light of day, but one thing is certain: the cat is out of the bag, and now it must be fed.

(NB – No information on this blog post derives from interviews with individuals in Mexico, including the defence team, which has yet to depose Mr. Esquino. This content is based exclusively on third parties outside of Mexico, court documents, and La politica’s own investigations.)

N.B.: If you are having difficulty submitting to the e-mail feed at the top of this page, press "enter" on your keyboard instead of the "submit" button.
Posted by TimothyEWilson at 08:02