Peña Nieto and his dirty war

During a tour of the northern Mexican state of Tamaulipas, Partido Revolucionario Institucional (PRI) presidential candidate Enrique Peña Nieto put his support squarely behind the former governor Manuel Cavazos Lerma in his race for a senate seat.

It’s a risky political move. Cavazos Lerma is currently under investigation by the attorney general’s office, along with former PRI governors Tomás Yarrington Ruvalcaba and Eugenio Hernandez Flores. The investigation came to light because prosecutors asked transportation authorities to keep track of when the ex-officials entered or left the country.

The three governors represent almost 20 years of continuous rule: Cavazos Lerma served as governor from 1993 through 1999; Yarrington Ruvalcaba served from 1999 through 2004; and Hernandez Flores served from 2005 through 2010.

In a campaign stop in Ciudad Victoria, Peña Nieto clearly indicated that he believed the charges to be politically motivated. The current Mexican president, Felipe Calderon, is a member of the competing right of center Partido Acción Nacional, or PAN.

In a speech during the campaign stop, Peña Nieto said that the PRI was “committed to the rule of law” and that it would defend it during the election. His confidence may stem from the fact that the accusations were leaked – the investigation was intended to have been kept private until more evidence had been collected.

Peña Nieto went further, saying that it was important to avoid partisanship in the application of the law, even suggesting that there was a dirty war, or guerra sucia against the PRI – also known as the “tricolor” for its party colors of green, white and red, which correspond to those of the Mexican flag.

The candidate’s invocation of the dirty war is potentially quite inflammatory, as it was the PRI – in power for most of the 20th century – who conducted the guerra sucia in the 1960s and 1970s, in which many dissidents were killed and “disappeared”.

It is also, perhaps, an insensitive time to bring up the subject, given that one of the big players in the dirty war, Miguel Nazar Haro, died of natural causes last week – proving that the impunity of Mexico’s ruling classes is still firmly entrenched.

Peña Nieto has seen his lead falter in the past weeks, but his telenovela good looks are still considered by many to be a distinct advantage. Perhaps this is why the former governor of the State of Mexico said in Ciudad Victoria that "women will be the engine of [his] victory." 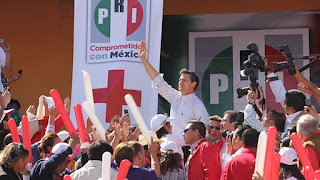 Aside from these fatuous comments, Peña Nieto is now clearly willing to play hardball, saying that “We will not let authoritarian acts...threaten the democracy in our country."

In a statement issued early Tuesday, the Attorney General's Office has not said why the former officials are being investigated, but by necessity it would involve federal crimes. Organized crime, drug trafficking and money laundering are all considered federal offenses in Mexico; however, the rumour mill is rife with word that the government is set to implicate the former governors in the killing of Rodolfo Torre Cantu, who was thought to have been murdered by a drug cartel.

This is an incredibly serious accusation. Torre Cantu was himself a PRI candidate for the Tamaulipas governorship. His death was the result of a very aggressive premeditated attack: six others died with him in a hail of bullets en route to the General Pedro J. Méndez International Airport in Ciudad Victoria on June 28, 2010. This political assassination has been considered the most serious to hit Mexico since the killing of the PRI presidential candidate, Luis Donaldo Colosio, on March 23, 1994.

However, the investigation is questionable, given that it is reportedly based mainly on statements by a former member of the ultra-violent Los Zetas cartel, Miguel Soto Parra. Arrested in 2009, Soto has since become a protected witness of both the Mexican and US governments.

As well, though Mexico’s interior minister, Alejandro Poire, confirmed there was an investigation, he denied that the three PRI politicians were under a travel ban – an airport official in Tamaulipas had apparently issued a memo seeking to keep those named in the investigation from leaving the country, which was a mistake. The official has since been relieved of his post.

It should be noted that politically motivated arrests are not unknown in Mexico: in the state of Michoacan in 2009 federal prosecutors arrested 12 mayors and 23 other officials – all 35 were later acquitted and released.


Also, if you have read this far, perhaps you would support our efforts? We do this for free. Supporting La politica es la politica is easy - simply click on the "donate" button on the upper right-hand side of the page. We are talking small generosities, not big bucks. As a heads up, Pay Pal will insist that you use it if you are already on account. For direct credit card payment, you will then have to use a number and email that Pay Pal doesn't recognize in order to escape their benevolent grasp.
Posted by TimothyEWilson at 20:00